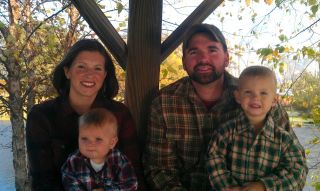 Well the last two days in the Wisley house has been fun... NOT! Jake somehow picked up a cold, I think. Unless he is teething, which I am pretty sure he isn't since he sounds so congested and has been sleeping like it is his job!  I will admit it kind of hurts my pride that he got sick since I pride myself on how healthy our house has been for the past two years.  It figures that the one to get sick would be the one person in my house that doesn't understand why he feels like crap and I can't tell him why I have to keep using the bogger sucker on his nose and wipe his runny nose every two minutes.  Thankfully I think he is feeling better today. Yet another reason why to hate winter! Nasty colds attacking out of nowhere!
I have been debating on when to start Jake on solids and with the help of some good friends decided that I will continue to stick with only breastmilk until he is more interested in eating solids. He is still growing and seems completely satisfied. To be honest I am not ready to start solids since breastfeeding is so much easier! I used to think that I would look forward to seeing breastfeeding coming to a end, but now that we got the hang of it I feel it comes natural to me now. It also helps that Jake eats A LOT  faster now too. The first two months it took 45 min to feed him and now it only take 15-20 minutes.
Jake will be 5 months old on Saturday.  He has changed so much the last two weeks. He giggles and laughs a lot more now and we are even working on sitting up too. We also set up the Johnny Jump Up for him last week. I was surprised to see him in it this early. I figured it would be another 2 months before he would be ready to play in it.

I am still faithful to my no-shampoo experiment.  It has been 4 weeks since I washed my hair with shampoo. I got a haitcut last week and that helped tremendously with the dry dead ends.  I think I picked a good time to experiment since I don't get out much this time of the year. I have been going about 6-8 days before I use one part baking soda to 4 parts water to wash my hair.  It looks and feels pretty close to how it felt when I was using shampoo and conditioner.

We are a month away from our vacation to Florida! We will be spending 10 days along the Gulf and then 7 days in Puerto Rico. Joe is speaking at a school that our friend works with so that trip is labeld more of a work trip for him. I am just going along to hang out with Lindsay, Craigs' wife, who also works at the school.  The only places I have visted besides other U.S states is Mexico and Canada where I lived for four years.

Well, that is about all I can share about my boring old life for now. I am so looking forward to April! The first 3 months of the year are always a drag for me. Thankfully we will be in wamer places for 3 out of 4 weeks in March!
Posted by Melissa Wisley at 12:51 PM